Back Bay Through Time

In stock (can be backordered)

In his new book Anthony M. Sammarco outlines the Back Bay of Boston, a neighborhood of the city that is not just the quintessential Victorian neighborhood of the 19th century, but one that was infilled and planned as the premier residential and institutional development. Begun in the late 1850s when the marshlands west of the Boston Public Garden were infilled through the ingenuity of John Souther, the Back Bay was to become a massive project that took over three decades to complete. With fill brought by gondola cars from Needham, Massachusetts six days a week, twenty-four hours a day, every 45 minutes, the fill had an average depth of 20 feet and the expanse of the Back Bay to be filled was roughly 460 acres. A monumental task, it was said that so successful was the venture that by 1885, only a small area was left to be infilled near the Back Bay Fens. In this photographic history of the Back Bay of Boston Anthony M. Sammarco, with the contemporary photographs of Peter B. Kingman, has created a fascinating book that chronicles the neighborhood from the late nineteenth century through to today. Walking along Arlington, Boylston, Newbury Streets, Commonwealth, Huntington and Massachusetts Avenues and stopping at Park Square and Copley Square, this visually fascinating book offers a fascinating glimpse of the Back Bay of Boston Through Time. Includes 182 black & white photos. 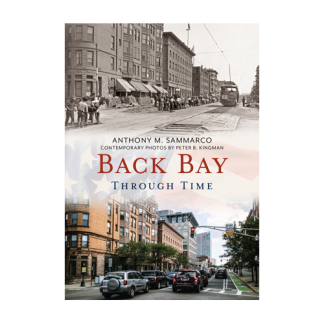 You're viewing: Back Bay Through Time
$20.50 In stock (can be backordered)Add to cart